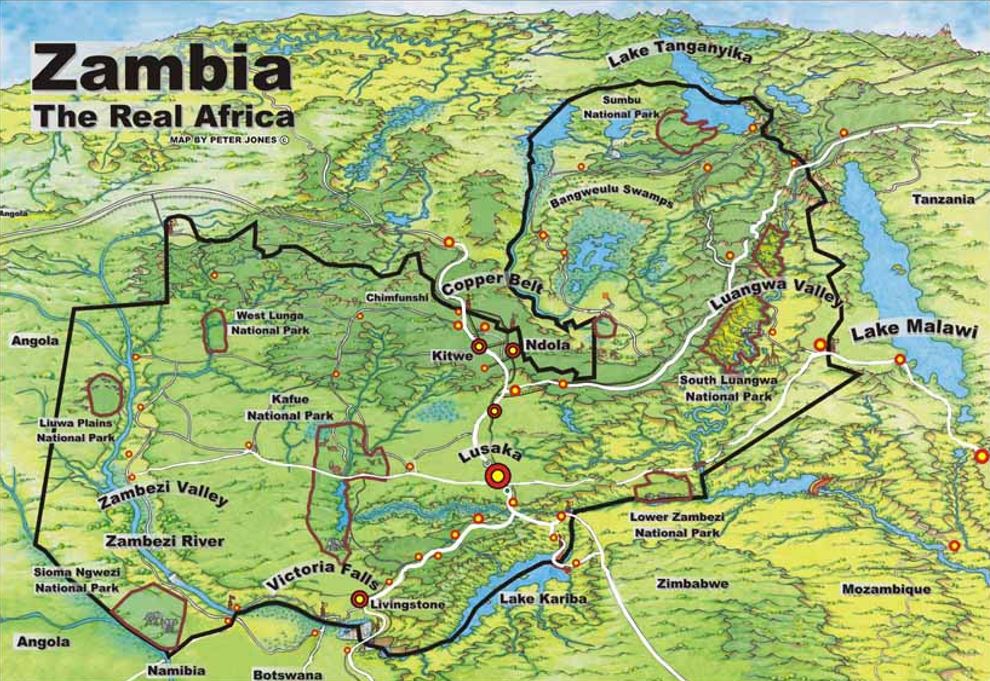 This is a country famed for its vast, unspoiled wilderness areas, with some of the most prolific populations of game on the African continent. It is also the wettest country in Southern Africa, so visiting in many areas is seasonal, but each has it’s special qualities.

Zambia’s elevation on a plateau gives the country a comfortably moderate climate, despite the fact that it is located in tropical latitudes. Warm winter days although the nights can be chilly. Very little wind. Plenty of sunshine all year. Thunderstorms in summer that don’t last too long. The lower areas like the Zambezi and Luangwa valleys can get very hot in October.

The Victoria Falls, on the border with Zimbabwe, is one of the most spectacular sights in the world. In the local language the Falls are called “Mosi-oa-Tunya” or the “Smoke that Thunders” because of the spray and noise created as the mighty Zambezi River plunges over the cataract.

The Mosi-oa-Tunya National Park has been created to protect the wildlife and environment of this area. Walking safaris here are a great way to see Zambia’s plentiful plains game with no predators. Immediately downstream of the Falls are some of the most challenging white-water rafting runs in the world. Bunji jump from the famous Vic Falls bridge or swing across the gorge, take a micro-light flight or helicopter flip.

Eight kilometres from the Falls is the town of Livingstone, named after  the Scottish missionary/explorer, Dr David Livingstone.The Livingstone Museum houses a collection of memorabilia of as well as exhibits tracing the history of mankind in Zambia. The Railway Museum has some great old steam train relics.  Just outside Livingstone is the Maramba Cultural Village, giving visitors a taste of the traditions of the local Tonga people who inhabit this region.  Zambia’s lakes – in particular Lake Tanganyika and Lake Kariba – provide opportunities for boating, sailing and other watersports such as waterskiing and windsurfing. There are good golf courses throughout Zambia, including the championship Lusaka Golf Course.

The Great Rift Valley slices through the South Luangwa National Park, with 800 metre high plateaux on either side. Through the middle of the valley runs the Luangwa River, which, with its tributaries, account for the great profusion of game to be seen including large herds of elephant, lion, leopard, numerous antelope species and certain types of giraffe and wildebeest are unique to the valley. The North Luangwa National Park is less visited than its southern neighbour, offering a complete, off-the-beaten track experience, especially on walking safaris. A dramatic feature is the 1,100 metre Muchinga escarpment on the park’s western boundary. The Mwaleshi River cascades down the escarpment in a series of waterfalls. The park is noted for its huge herds of buffalo as well as elephant, lion and leopard. Some antelope species like oribi, hartebeest, reedbuck and eland are more common than in the southern park. Covering 22,500 sq km, Kafue is one of Africa’s largest national parks. The Kafue and Lufupa river systems account for the diversity of landscapes and plethora of wildlife. Kasanka, a wetland park, a refuge for the shy sitatunga antelope, also attracts a number of unusual bird species not normally found in the Southern Africa region. To the far north, on the shores of Lake Tanganyika, Nsumbu reserve, is home to plentiful game. To the east is the Kalambo Falls. The Lower Zambezi National Park, lies along the northern bank of the Zambezi River some 400 km downstream of the Victoria Falls – a magnet for wildlife which such as elephant, hippo, buffalo, zebra, various antelope and predators such as lion, cheetah and leopard. 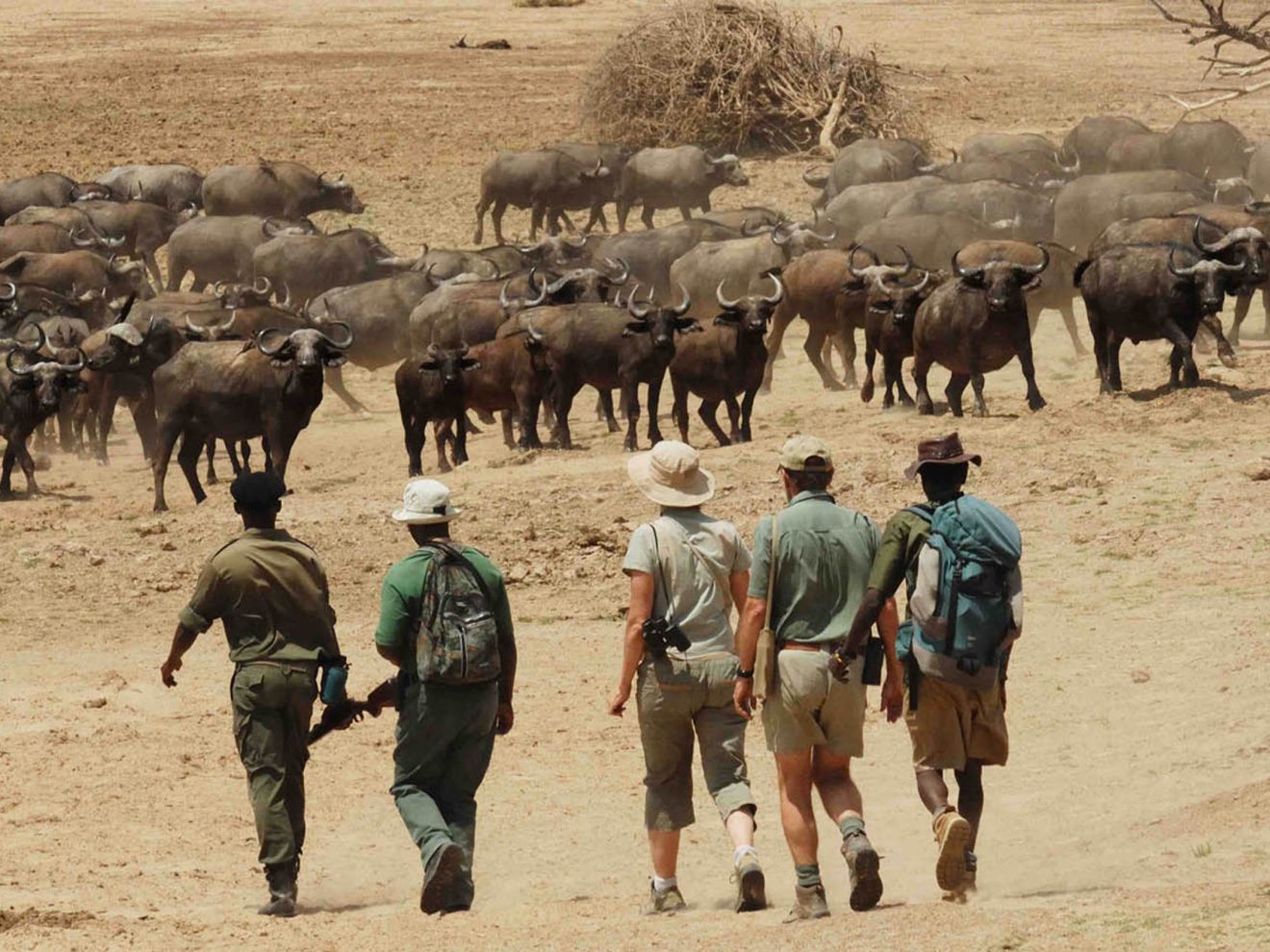 Walking safaris, believed by many to offer the ultimate wildlife experience, are a particular specialty in Zambia. Although animals tend to be more wary of humans on foot than in vehicles, the opportunity to become part of the environment is very rewarding, allowing walkers to appreciate the fascinating activity going on around them. Walks, led by experienced, armed safari guides are conducted at a leisurely pace to enable the guide to interpret all the “bush signs” and the participants to absorb the wonders of the bush. Game drives and Night Drives afford a wonderful way to view the habitat, in the comfort and safety of an open vehicle, able to cover a wider area.  Photo opportunities abound.  Canoeing Safaris are an exceptional treat as you float down one of Zambia’s wide river courses through game reserves. The birdlife is a visual and audible feast and often sighted are elephant, buffalo, waterbuck and of course hippo and crocodiles.

Zambia is well known for excellent Tigerfish, fly fishing, and bream amongst others. Catch and release is preferred unless you are fishing to eat. The best fishing areas are:

Birdlife can also be seen in great profusion in Lochinvar National Park. Hosting 428 different species, including a number of rarities, it is one of the finest bird sanctuaries in Africa. On the floodplain lechwe antelope graze in their thousands. Zambia shares the vast Lake Kariba with Zimbabwe, which attracts a wide range of animals and birds to its shores. The Kafue River and Lake Itezhi-teshi can be explored by boat. It is worth spending some time in Lusaka, the lively capital, with its markets and botanical gardens.

– Travelling from Europe to Lusaka,

– From the USA and Australia, you must travel through Europe or Johannesburg. Most Southern African capitals have connections with Lusaka airport. Entering Zambia by road you’ll find that most borders are open from 06.00 to 18.00. In the southern region Chirundu, Kariba, Livingstone and Kazungula are the main borders.

The unit of currency is the Kwacha, divided into 100 Ngwee. Notes are issued in Kwacha denominations of 2, 5, 10, 20, 50, 100, 500, 1000, 5000 and 10000. Foreign currency can be imported without restriction but it must be declared at customs on arrival. Foreign exchange is only permitted through an authorized dealer approved by the Bank of Zambia.

Check with us for details

Health Requirements: Although there are no compulsory vaccination requirements for entry into Zambia, immunisation is however recommended against hepatitis A, polio, tetanus and typhoid. If travelling onward to South Africa a Yellow Fever certificate is required. Malaria exists all year throughout the country and there is also a risk of rabies. Those intending to travel through the Kafue National Park are advised to take an insecticide in case their journey takes them through a tsetse-fly area. Swimming should be confined to swimming pools or lakeside resorts where the water is known to be safe

Zambia’s elevation on a plateau gives the country a moderate climate, despite the fact that it is located in tropical latitudes. There are three seasons: warm and dry from December to April; cool and dry from May to August and hot and dry from September to November

The main roads are generally good for driving but do watch out for potholes here and there.  There are a number of regional and charter air companies operating in Zambia. Car rental is available, although some routes are inaccessible to ordinary vehicles during the rainy season. Taxis are available in towns and major centres are connected by bus and train.

Zambia comprises an amazing 72 ethnic groups and has a population of less than 15 million. About 90% of the population fall into 9 major ethnolinguistic groups: the Nyanja-Chewa; Bemba; Tonga; Tumbuka; Lunda; Luvale; Kaonde; Nkoya; and Lozi.  English however is spoken widely. Zambia is also home to a thriving Asian community, predominantly of Indian and Chinese origin, numbering around 100,000, as well as a number of European expatriates, some of whom were invited to settle in Zambia by the local government having been cast off their farms in neighbouring Zimbabwe. All this makes Zambia home to a vibrant mix of cultures, traditions and peoples, and Zambia is also widely-considered to be one of the friendliest and most welcoming nations in the world.